Prior to the Residential Tenancies Act 2004, residential tenancies were unregulated. The practice at the time was to give a 12 month lease.

The common understanding of a rent review was that it was a change of rent and it could occur only every 12 months and apply at the start of the new 12 month Fixed Term lease.

The RTA 2004 established the (P)RTB, a state agency that would amongst other things, maintain a register of tenancies. Registration of a tenancy is now compulsory.

In Part 4 of the Act, the principal of a minimum in security of tenure ( Part 4 tenancy ) was created.

Problems with the new law

The market continued to issue 12 month leases. In many instances Tenants and Landlords believed the Part 4 to be a 4 year lease, when in fact the Part 4 Tenancy was for up to 4 years. In addition, many users of the legislation believed the grounds for terminating a Part 4 tenancy also applied to the Fixed Term. There is now separate information on the RTB website about terminating a Part 4 Tenancy and Terminating a Fixed Term. However confusion still prevails.

There was  confusion as to whether this law changed how a rent review was to be applied. It simply changed the dates. However in 2016, the RTB and it’s adjudicators and tribunals split with the common understanding of a rent review.

The common understanding was that a change of rent and rent review were the same. We are not certain when the RTB and it’s adjudicators and tribunals split with the market’s common understanding of a rent review, but the earliest evidence we can find of this is in a case the Tribunal heard on 18 May 2016.  Tribunal Reference No: TR0216-001630 / Case Ref No : 1215-22946.  The dispute concerned the market rent. However the Tribunal focused on the manner in which the notice was served.

In previous Determination Orders, the Adjudicators and Tribunals had found the operable date of a rent review is the date the new rent was to have effect. This was the common understanding of the Market and the understanding on which the appellant Irish Residential Properties REIT plc was depending. The Tribunal found “A review of rent is not defined in the Residential Tenancies Acts”.

So what was the rent review ?  They decided the Rent Review was NOT the change in rent or the new rent. The Rent Review was something that happened before the notice was sent. This means that the 1st change in rent could only be applied at 24 months + 90 days. Written confirmation that the RTB’s opinion was in line with the above findings, was received by us on 5th April 2017 and is included at the end of this blog.

The 24th December 2016 saw the introduction of rent control measures in Dublin and Cork.
An area could be designated an RPZ and any rent review was subject to a formula.
Details of these changes are the subject of another of our blogs, but for the purposes of this document it is important to know :

Most of these provisions were enacted on the 4th June 2019.

The Bill’s key provisions are :

At the time of writing, annual registrations had still not been enacted.

From the adminstration of a tenancy point of view, the main implicaiton of this Act is that Further Part 4 Tenancies created at the end of each 6 year cycle are now no longer considered as New Tenancies. A Further Part 4 Tenancy is now treated as a continuation of the current existing tenancy and consequently a new rent cannot now be set at the start of the Further Part 4.

You have an option toward the end of the FIRST Part 4, to deny a further Part 4. If the Further Part 4 is not denied, the tenancy simply continues.

The easiest way to explain Residential Tenancy Law is as follows :

below... RTB’s opinion concerning " The Split " 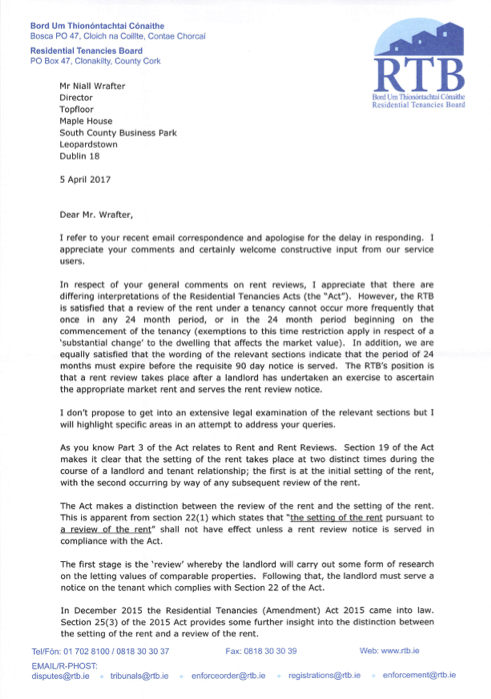 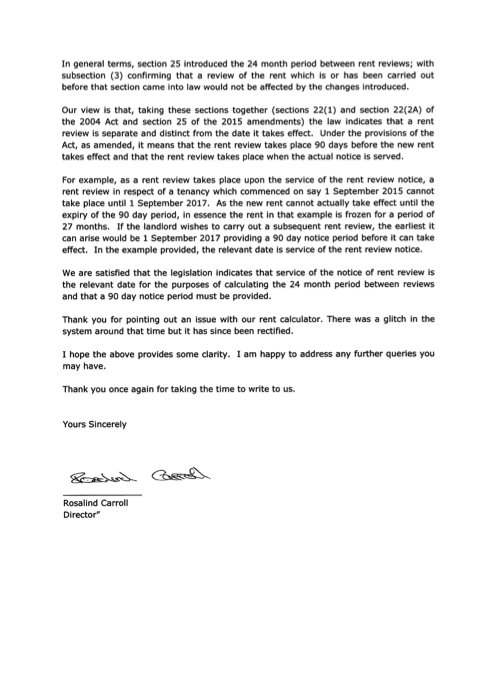 Disclaimer : This article is for information purposes only and does not give, or purport to give, professional advice and should not be relied upon. While every care has been taken by the Topfloor Systems Limited in the preparation of the articles on this website, we do not guarantee the accuracy or suitability and you must seek separate professional advice. Topfloor Systems Limited shall not be responsible for any damage or loss to any party, who relied upon the terms of this article, which resulted in losses incurred as a result of any inaccurate, mistaken advice contained in this article.
Back